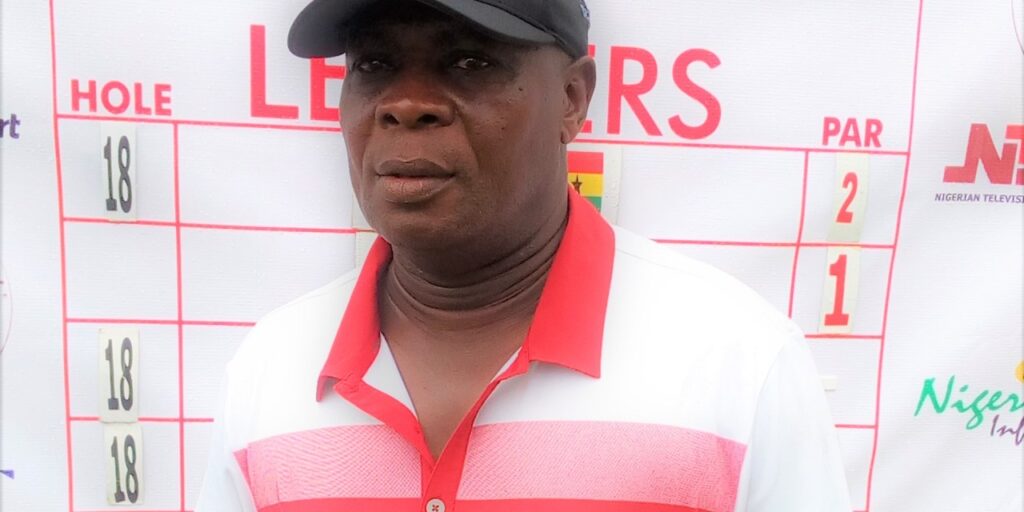 After calm conditions early in Friday’s second round, play was suspended when a heavy rain decended over the portharcourt course.

The Rain which had the play suspended for over two hours during the second round, saw the Leader Board take another dimension as Ghanaian player Emos Koblarh alongside home based player Mike Ubi, hold a share of the lead after the second round of the 4th Portharcourt Classics joining overnight leader Vincent Torgah in a three way tie at Level par heading into the moving day of the tournament.

The course which seemed unplayable due to the downpour was later declared playable after necessary checks by the Tour Officials. ” Today I was hitting and striking the ball well but wasn’t getting exact results I wanted and I had a little misconception about how much the green’s were running”- overnight leader Vincent Torgah said after a second round two over par 72, which saw him being joined by other two players.

Emos Koblarh who finished joint runner up in the just concluded 62 Asantehene open held in his home country Ghana last weekend, has also registered three top-five finishes in his last 3 starts on the African Tour since joining the Tour in February – shot the best score of the day after a blemish-free two-under 68. “I hope I can keep calm tommorow” said koblarh who is in a search for a first win on the African Tour.

The momentum began for the Ghanaian after he lit up the front nine with a stunning one under 35. In a rain delayed second round at the Lush Portharcourt Golf Course.

Korblah hit the turn in 33 courtesy of a birdie at the fifteenth and an impressive par at the penultimate hole which left him level at the top of the leaderboard.

Meanwhile defending champion Sunday Olapade was able to keep calm in the harsh weather conditions to return a one over 71 While Cameroonian priestly Nji also returned a one under 69 to make the cut.

Submitted by The African Tour