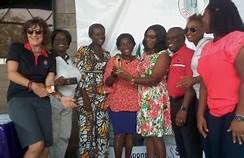 She expressed gross thanks to the club for allowing her serve it, particularly the ladies division, her sponsors and all those who supported her in diverse ways during her tenure.

She told the incoming executives to call on her at any time, should they need her advice.

Under her tenure, the ladies wing witnessed frequent competitions aimed at enhancing networking among members.

It was double handicapper (20) Clara Price, who picked the ultimate prize in the ladies silver division after a 72 net, beating Christine Furler on count back, while Jessica Tei finished third with 75 net.

Diana Baiden recorded a 76 net score to win the bronze division with Vastie Amoafo Yeboah (69) and Mariatu Bah following in that order.

Clara extended her dominance to the closest to the pin category while Church Ansah won the men’s event.

The event was sponsored by SVANI, Ecobank and All Star Insurance.